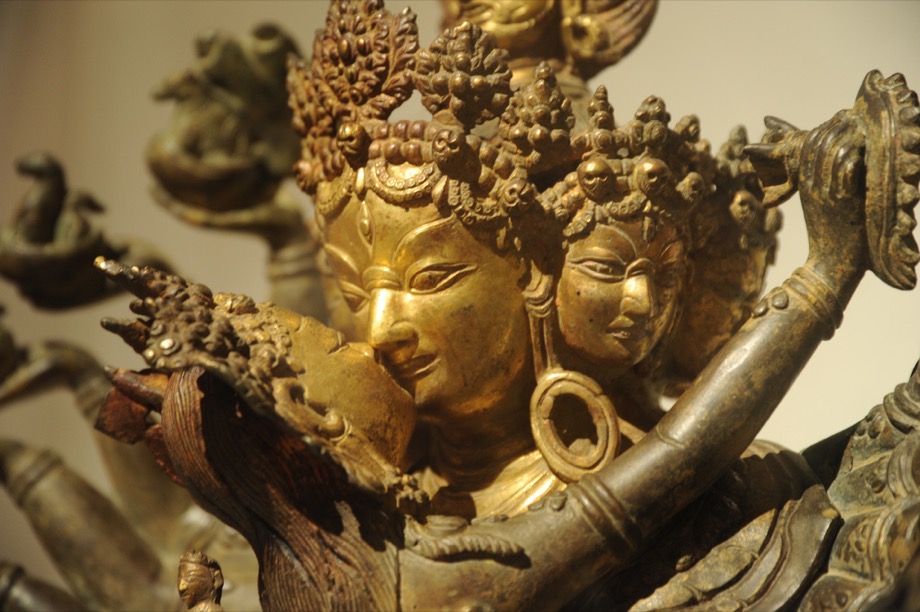 If you have read my post on the definition of Yoga, you won’t be surprised to hear that the concept of Tantra refuses to be given an objective, neat definition the way a scientific term does. Instead, when trying to understand Tantra we are forced to go through a process of investigation, which will probably end up with a personal, unique definition of this concept. This is not a problem though since from the perspective of Tantra, it is not so important to give a rational, schematic definition, but rather to experience an intellectual and practical journey of understanding, which is different for everyone.

When you hear the word “Tantra”, you probably think about two things: sexuality, and spirituality. Nevertheless, in its original meaning, Tantra refers to a body of teachings, both orally transmitted and written, that form a system of beliefs and practices arising in India around the 5th-6th century A.D.

Tantra did not emerge as a separate, distinct philosophical system, but rather as a “point of view” that immediately mingled with and influenced all the pre-existing spiritual traditions: Yoga, Buddhism, Jainism, to name just the main ones. This is why, strictly speaking, it is more accurate to talk about Tantra Yoga (or Tantric Yoga), Tantric Buddhism, Tantric Jainism and so on. Just as an abbreviation, the word Tantra will sometimes be used here to refer to Tantra Yoga, or the Tantric outlook on the Yoga system.

So, what is Tantra Yoga and how does it relate to other understandings of Yoga ? It is important to remind, that the classical definition of Yoga as given by Patañjali in his Yoga Sutras differs from our modern conception in many ways. In classical Yoga, there isn’t a lot of attention to the physical: the practitioner is only advised to maintain good health so that his meditation will not be disturbed, and to be able to hold a comfortable meditation posture (asana) for long stretches of time. The body is essentially seen as a tool for meditation, which becomes really important only when it is problematic because it’s difficult to calm the mind if the body is ill or in discomfort. More generally, in the classical view of Yoga, Nature itself in all its manifestation (the environment, the stars, the elements …) has, as its higher purpose, to act as a mirror for the reflection of the Spirit. This is a logical consequence of Patañjali’s fundamentally dualistic view which clearly separates Prakriti and Purusha, Nature and Spirit, as two radically different categories of existence.

By comparison with the classical point of view, we could define Tantra as a holistic approach to Yoga. In Tantric Yoga, Nature in all its manifestations, including the physical body, is referred to as Shakti, and it deserves the same degree of respect and adoration as its counterpart: Shiva, the Spirit or Consciousness. This is a fundamental shift, and it has a number of consequences that further characterize Tantra Yoga and make it different from other approaches on spiritual evolution. For example, the body of the practitioner is no longer perceived as just a tool for meditation; instead, it is considered a temple in which a hidden, enormous force lays dormant. This energy, called Kundalini Shakti, can be awakened and channeled through specific techniques; because of the holistic Tantric approach, which maintains that the physical and spiritual levels are connected and mutually influenced, the voluntary rising of Kundalini Shakti can enable the practitioner to attain evolution, all the way to its supreme stages. The study of the physical body from this new perspective gave rise to the well-known system of chakras (energy nodes) and nadis (energy channels) that lies at the base of Hatha Yoga. The most powerful form of energy in the human being, or otherwise said the clearest expression of Kundalini Shakti, is considered to be the sexual energy.

In the same way, entities that are outside one’s own body can also be used to propel spiritual evolution. It is the case, for example, of mantras and yantras, which are considered as auditory and visual representations of high energies; if correctly used, they can greatly assist the practitioner in her evolutionary process. Taking it a step further, other human beings are also considered as extremely refined, powerful expressions of fundamental energies of the Universe; this leads to the analogy of Shakti with the female principle, and of Shiva with the male principle. Both the female and male principle are present in each one of us, although always in different proportions. Thus, two (or more) individuals can enter into a relation of polarity, in which one of them is embodying Shiva while the other is playing the role of Shakti. The most powerfully polarized interaction is the sexual relationship or Tantric lovemaking; the importance of polarization for Tantra Yoga is discussed in another post on this blog.

From this brief sketch, it is already possible to identify two fundamental traits of Tantra Yoga. On one hand, in a truly holistic perspective, Tantra Yoga is concerned with all energies and manifestations of Nature, as well as with the Spirit, or Consciousness. From this standpoint, everything can be used as a prop for spiritual evolution: food, nature, the Sun, the mind, emotions, and so on.

Secondly, Tantra gives a special relevance to polarity, i.e. the dance of interaction between Nature and Spirit, Shakti and Shiva. This brings us to a conclusion: sexuality has a special place in Tantra (it is both the main manifestation of Kundalini energy inside the physical body, and the most strongly polarized interaction between human beings), but, at the same time, Tantra deals with much more than sexuality, and it is definitely not based on it. As someone once said, “Sex represents 5% of Tantra, but a very important 5%“.

Coming back to the original question, it seems that we might have gotten a bit closer to defining Tantra Yoga. This is one possible definition:

Tantra Yoga is an holistic approach that maintains that the objectives of Yoga can be pursued by the use of any manifestation of Nature, including the physical body and sexuality.

Obviously, the previous sentence only make some sense if you have an idea of what Yoga and its objectives are. This isn’t surprising, since I am talking here about Tantra Yoga, or a particular perspective on Yoga. But then we might ask ourselves if it makes any sense at all to talk about Tantra without mentioning Yoga, as it often happens in the modern society. Can we use the Tantric techniques of energy channeling and spiritual elevation, if we don’t get, through Yoga, a clear understanding of our own structure and our evolutionary objectives?

My suggestion is that we should understand Tantra Yoga as a system in which the two concepts cannot be separated from each other. Each practitioner of Yoga may freely choose among different points of view on this ancient discipline, and Tantra Yoga is just one of them – for some people, other paths such as Bhakti Yoga or Karma Yoga will feel more adequate. However, Tantra offers an interesting, unique approach: one that focuses on the utilization of our own deepest source of energy, and the interaction with others in a relation of polarity. Through the conscious use of these tools, we can hope to accelerate our progress towards the objective of all forms of Yoga: our physical, mental and spiritual evolution.