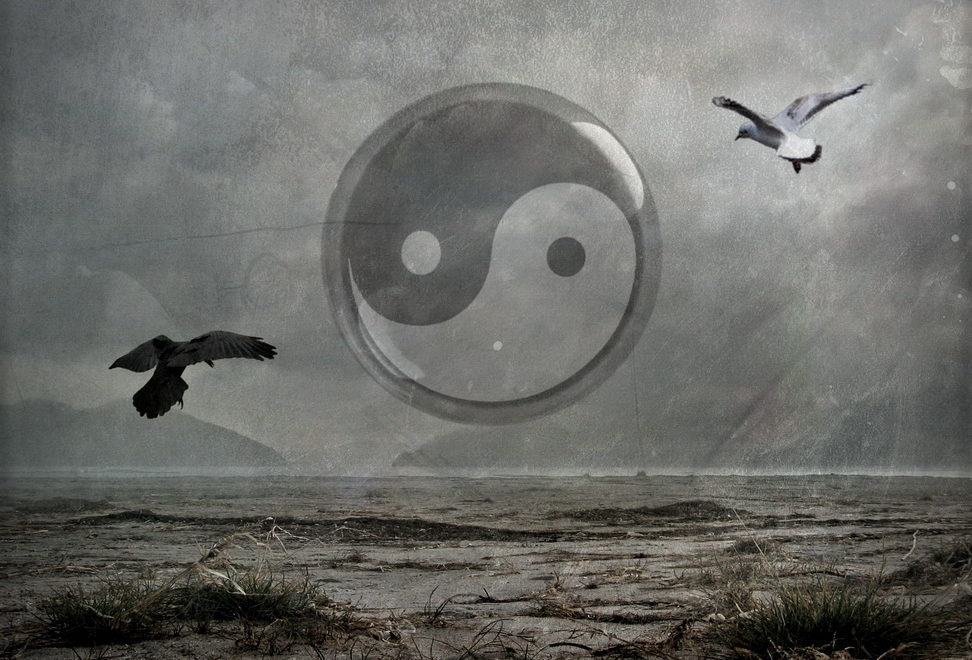 Polarity is a central concept in Tantra Yoga, but it is often misunderstood – especially when it comes to sexual polarity. It is therefore crucial to have an analytic, prejudice-free outlook on what polarity is, and how it can help us in our path of evolution.

As I have tried to illustrate, The Tantric perspective is characterized by its holistic approach and the willingness to use all kinds of energy for the objective of spiritual evolution; sexual energy, being the most powerful form of energy in the human being, is obviously an ideal candidate. However, according to the Tantric view, energy always flows between two opposite poles. Just like electric current flows between a negative and positive pole, (and the higher the difference in voltage, the stronger the intensity of the current), the same applies to sexual energy: in order for it to flow, we need two opposite poles – and the higher the difference, the stronger the energy is. Different names have been used to describe the “sexual poles”: yin/yang, negative/positive, lunar/solar, and feminine/masculine. In Tantra, we usually speak about the feminine and masculine poles.

The sexual poles – do they exist?

First of all, we could ask ourselves if the feminine and masculine poles really exist. This apparently simple question is, in reality, hiding an insidious trap: what, exactly, do we mean by “really exists”? Surely we are not talking about the kind of existence that houses, elephants, and green mangos have – we are thinking about a more abstract class of existence. But then, how can we tell if a sexual pole really exists – what proof would we consider as valid? In the same way, do things like friendship, numbers, or the green colour “really exist”? As you can see, this thread of reasoning is taking us into interesting but tricky philosophical speculations, and sooner or later we will need to define such concepts as “reality”, “existence”, and “entity” in order to answer the original question. As alluring as this philosophical discussion might be (and there is a whole branch of knowledge, called Ontology, dedicated to this sort of subjects), it obviously leads us far from Yoga and Tantra.

Thus, I think we can settle down for a more realistic requirement: the concepts of masculine and feminine poles, or essences, are valid as far as they are useful for our discussion, and they can bring us new knowledge. You are then, totally free to discard them in favor of other, better classifications if you find that they don’t work for you. But this whole post, as well as many other articles and books, are trying to demonstrate that these concepts can offer some important insight into fundamental matters.

Once you are willing to use the ideas of feminine and masculine poles, there is another common misconception that you need to be aware of. Even though this might sound confusing, the terms “feminine” and “masculine’ used in this context do not have a one-to-one relationship to the two commonly recognized biological genders that go by the same name. In other words, a (biological) man can be “feminine” an a (biological) woman be “masculine” – and this is valid for people of any sexual orientation. Also, these concepts are relative: somebody is masculine only relatively to another person which is feminine in comparison, and so on. For the sake of simplicity, many authors, when talking about sexual polarity, use the words “man” and “woman” to refer to individuals who are, respectively, masculine and feminine in relation to each other. But this is only a simplification, and, biologically speaking, they could be well be two women, two men, two transsexual persons, or any other combination thereof.

Even though the concepts of masculine and feminine are relative, most of us (but not all of us) have a predominance of one of these sexual poles and an attraction towards the opposite. For example, a woman could be predominantly masculine in sexuality; this means that she will generally be attracted by human beings who are feminine relatively to her. Again, this is not true for everybody: some people have a balance of both sexual poles, and they are attracted to partners of any orientation, often switching sides of polarity with the same or multiple partners. Generally speaking, it is common for men to have a predominance of the masculine polarity, and for women of the feminine, but this is neither a rule nor a necessity. From the standpoint of Tantra Yoga, it does not really matter which polarity each of the two partners takes, so long as they are willing to play out opposite polarities in this specific sexual encounter.

Summing up, when speaking about “masculine” and “feminine” in Tantra, we are not referring to the biological genders, but to two energetic polarities, with which each one of us may be more or less identified. In order to use sexuality for spiritual and evolutionary purposes, lovers need to generate a great amount of sexual energy, and the intensity of the energy depends on the difference of polarization; thus, while lovemaking, it is in the interest of both lovers to accentuate the femininity and masculinity of each, in order to increase the difference in polarization. As we shall see, however, polarization is not necessarily desirable in other aspects of life.

This accentuation of sexual differences, which we have called polarization, is extremely important even for non-Tantric sexuality. It is a well known fact, even in Western sexology, that as two partners grow closer and tend to identify with one another (as is the case, for example, in long-term couples), the sexual attraction tends to diminish. The “spark” is simply not there anymore, at least not until some difference or “otherness” is restored. This is one of the  paradoxes of love: lovers are naturally seeking closeness and identification, but their passion and sexual attraction needs some distance and diversity. In these cases, even a little bit of polarization can immediately “stoke the fire” and help rebuild passion and attraction. But is polarization also positive and beneficial in other aspects of everyday life, outside of lovemaking? In other words, should we try to enter more deeply in a masculine or feminine role (whatever might our preference be) the whole day long, or reserve this polarization for the sexual interactions?

My opinion is that polarization is extremely useful in sexuality, but not so much in our ordinary, every day life. On the contrary, from the perspective of evolution, we are striving to be more connected to our fellow human beings, irrespective of their sexual polarity; in some sense, we are trying to go past the differences, reaching a common ground that unites us. This involves, among other things, an exploration of the sexual pole that is less familiar to us: thus, a masculine man would try to develop and nurture his feminine side, so that the “feminine” is not so alien to him anymore, and he can understand it and connect to it better. This is an apparent contradiction with the necessity of polarization in sexual life: how can we, at the same time, try to be more different from each other in sexuality, while trying to get closer to each other in everyday life?

Well, this is only an apparent contradiction after all, and for more than one reason. First of all, as many sexologists have already noted, the state of sexual arousal is actually an altered state of consciousness. This makes it very unlikely, that the same “rules” apply to this state and to the normal, “lucid” state of consciousness that characterises everyday life (if this normal state of consciousness even exists, it is still open to debate). To make an example, bursting out in uncontrollable laughter is perfectly okay when we are in a normal state of consciousness, enjoying our time with our friends or families. However, if we were facing a dangerous situation and we were extremely focused on solving it, the same behavior would seem to indicate madness – or maybe extreme wisdom. We constantly transit among different states of consciousness during the day and night, and each one of these states has different “rules”. The same behavior or polarization towards feminine and masculine, could be perfectly appropriate in one state but not acceptable in another. This is a very important concept: in sexuality, different rules apply and we can embrace a much sharper polarization than we do in everyday life: we do not need to be coherent. For the same reason, as Dr. Jack Morin explains in his work on eroticism, sexual life should be maintained free from ethical, political and esthetic considerations that are otherwise important in normal life.

Another reason why we shouldn’t be surprised by the apparent contradiction between polarization and balance, is that we humans are inherently complex beings, able to assume various degrees in polarization in different situations, or even simultaneously. Without going too deep in the subject, it is a well-known fact in Tantra Yoga, for example, that men are usually “masculine” or yang in their physical body, but feminine or yin in their energetic body. The opposite is generally true for women: they tend to have a yin physical body and a yang energetic body. From another point of view, would we really be surprised if we learned that a friend of ours, who is very masculine in his everyday life, actually has a feminine, receptive polarity in sex? We intuitively know that this is a perfectly normal situation, and that an individual can have different polarizations in different aspects of her life.

The bottom line is that sexual polarity does not need to pervade all of our life to the same degree. It is perfectly possible to be strongly polarized in sexuality, but more balanced in everyday life. Strong polarization, when taken outside of the sexual context, still generates a high flow of energy, but not necessarily a beneficial one: if you have ever seen or experienced a highly passionate relationship, in which the two participants were extremely attracted to each other but did not seem to understand each other at all, you probably had a taste of what strong polarization feels like “outside of bed”. While it’s perfectly okay to have this kind of relationships, it is obvious that they are not the only way nor necessarily the most evolved one. In this respect, I personally disagree with the view expressed by many Tantra teachers, (for example, check David Deida’s “The way of the superior man”), in which strong polarities are considered beneficial both in sexual life and outside it.

According to Tantra Yoga, feminine-masculine polarity is extremely important in sexual interactions. Only through a strong polarization into the two opposite poles, can the partners generate a high amount of sexual energy and use it for spiritual purposes. However, polarization does not need to match the biological gender, and anyone can gravitate towards any of the two poles according to his or her own preferences. Outside of sexual interactions, polarization is not so necessary anymore. While some people may enjoy strongly polarized interactions even in everyday life, for others it is much more rewarding to maintain a more balanced, less polarized life while still having strong poles in sex. While polarization increases energy flow, balance reduces differences and allows understanding and connection, so both of them are important for an evolutionary process.